How do I add special characters or create content in languages other than English?

How do I add special characters or create content in languages other than English?

Many commonly-used special characters can be found in the Text Editor under the Insert Special Character button. Simply click on the button to view a list of the available characters.

Then, click on the character you want to insert into the text field. 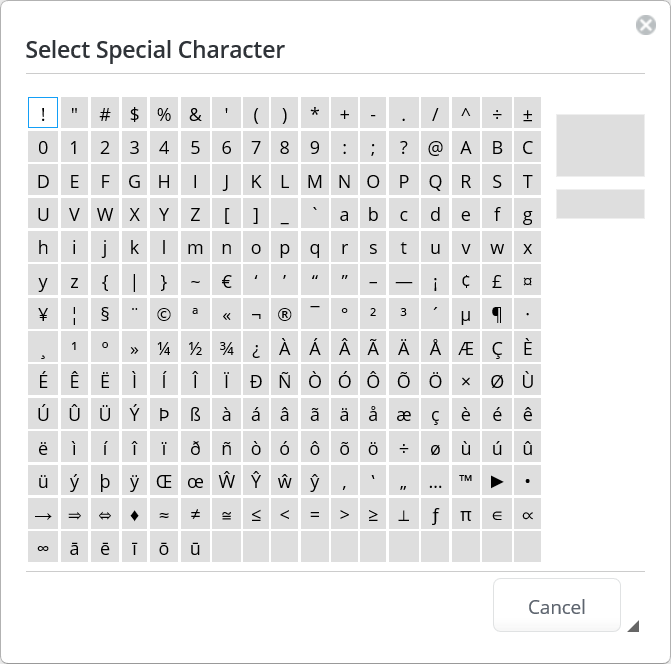 Note that there are some places where the Select Special Characters tool is not available.

Use Your Computer's Hotkeys and Shortcuts

Whether or not you are using the Text Editor, you can also use your computer's Hotkeys for accent marks and other special characters. These can vary from keyboard to keyboard and computer to computer, and you may also be able to configure them yourself, but once they're set up they should work in PowerSchool Learning the same way they would work in other contexts on your machine.

Remember, Hotkeys should work throughout PowerSchool Learning, even in places where the Insert Special Character tool isn't available. Hotkeys also tend to be faster, so if you're taking a language class that requires a lot of special characters, you'll save yourself some time if you set up Hotkeys instead.

You can find out a bit more about Special Character options here:

Use Your Computer's Language Settings

You can create content in any language in PowerSchool Learning, as long as you've set up your computer to type in that language. Depending on your operating system and keyboard setup, you may need to change some settings to allow you to switch between entering different languages, but once you're able to type in the language, you can enter its characters and letters anywhere in PowerSchool Learning.

Instructions for adding languages and keyboards in Windows 8