What does the Sync with Source option in my Roster mean?

Q: What does the Sync with Source option in my Roster mean?

A: Sync with Source is a way for teachers to get their rosters back in sync with an import. This is particularly useful if a teacher has made manual additions, changes or removals from their roster, and then decides later that they would prefer that the import manage their rosters again. 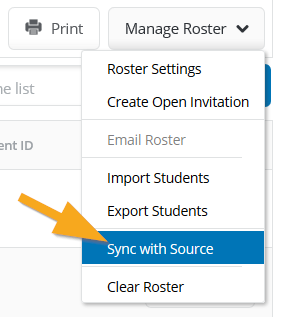 You will now see options for syncing your roster. If you have linked roster sections, you will be able to see the status of each section. Here's an example:

Examples of what may be seen at this step:

In Sync: If you see the "in Sync" label on your section or class, that means it's in sync with the import and you have nothing to worry about.

Section Manual: If you have a manually created class and/or manually created sections that are not linked to any class, you won't be able to Sync with Source because there is no tie to the import.

If you need to move a student between sections, you can do so in your roster under the Manage > Edit Student menu. Read more about moving students between sections here.