Why is Average not usually the right Mastery Level Calculation for Standards-Based Grading?

Q. Why is Average not usually the right Mastery Level Calculation for Standards-Based Grading?

A. In many cases, choosing Average as your Mastery Level Calculation will make it difficult or even impossible for students to achieve mastery. This is because an Average is extremely sensitive to low early scores.

If you are interested in measuring the consistency of a student's performance over time, Median is almost always a better choice.

Let's look at an example to illustrate why Average is rarely the best choice.

Imagine that you have a Standards-Based Gradebook using the following Scale:

Now let's imagine you have a student, "Eric", who has scored as follows on the first three assessments in the class. 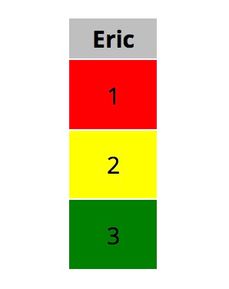 Eric started with low scores, which is perfectly normal for most Standards - if Eric had already mastered the Standard, he wouldn't need to be working on it.

However, though Eric met the Standard on his most recent assessment, Eric's Average is still a 2 - one point below mastery.

In this scenario, Eric would need to score fifty-seven 3s in a row in order to bring his average up to a 2.95. In other words, he could meet the Standard fifty-six times in a row, but his Average would still say that he hadn't mastered the Standard.

Alternatively, Eric could reach an Average score of 3 by scoring three 4s in a row - that is, he could surpass the Standard twice, but his Average would still say he hadn't met the Standard.

In other words, with an Average, two poor performances need to be offset by dozens or hundreds of strong performances. Essentially, because of how the math works, Averages require students to demonstrate mastery from day one.

The Median still has some weaknesses: for instance, if Eric had struggled through ten poor performances before achieving a breakthrough, he could demonstrate mastery nine times in a row before his Mastery Score showed that he'd mastered the Standard. But if you want your Mastery Scores to focus on consistency, A Median has all the advantages of an Average but none of the disadvantages.

If you're a School and District Edition customer looking for advice on Mastery Level Calculations, we'd be happy to help! Please reach out to your School Advisor via the Help menu in your PowerSchool Learning account.